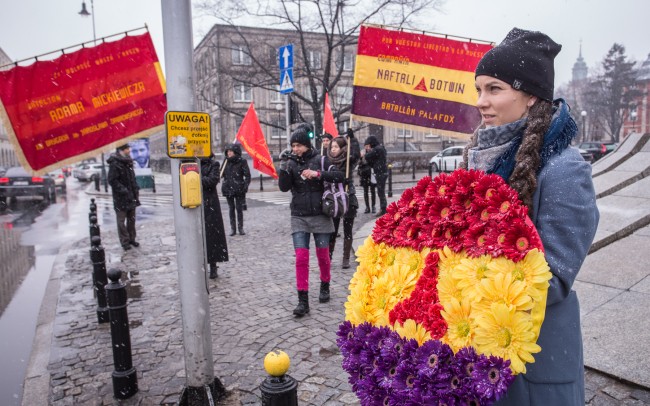 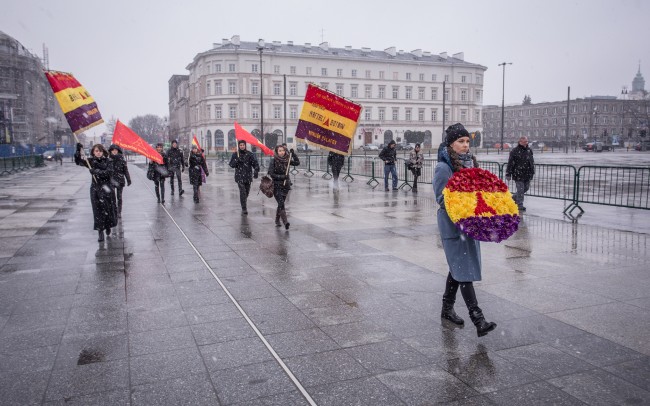 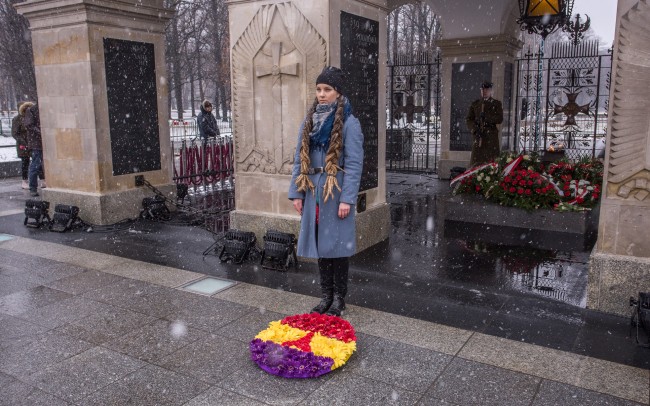 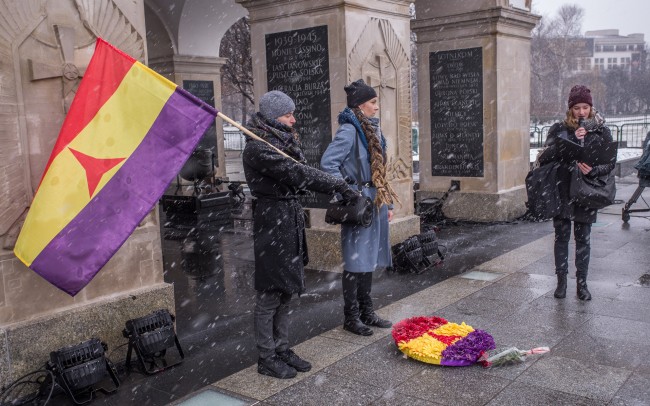 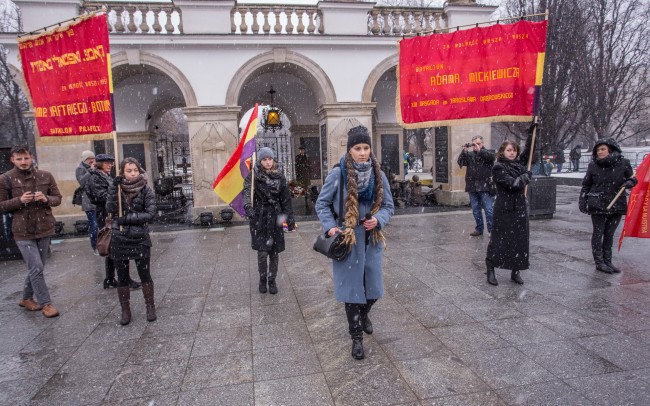 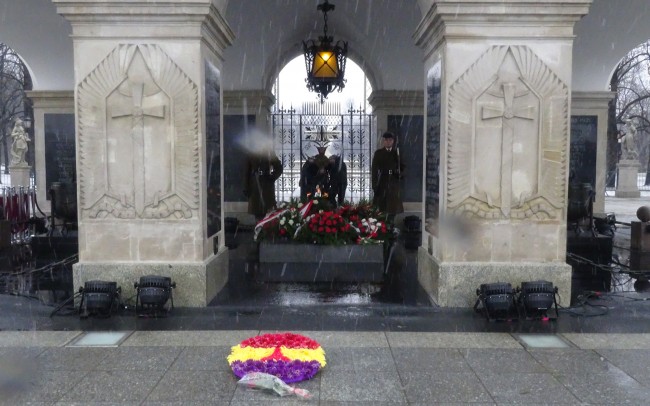 On the 1st March the art action by Zuzanna Hertzberg DABROWSZCZACY –  DISAVOWED AMONG DISAVOWED took place in front of the Tomb of the Unknown Soldier in Warsaw.
Dąbrowszczacy were the Polish citizens, members of the International Brigade in years 1936-1939, defending the democratically elected government of the Republic of Spain.
In the nineties plagues with the inscriptions commemorating the battles fought by Dabrowskis in the Spanish Civil War were removed from the Tomb of the Unknown Soldier. The names of the battles removed from the Tomb of the Unknow Soldier are Madrid 7.11.1936, Guadalajara 18.03.1937, Ebro 24.08.1938) .
There is a significant gap, which shows how memory can be disrupted. My action aims at restoring the pluralistic nature of history – writes the artist.
The 1st of March is the official Day of Remembrance of the Disavowed Soldiers, 2016 also marked the 80th anniversary of the outbreak of the Civil War in Spain.
The performance of Zuzanna Hertzberg creates a narration which incorporates the Dąbrowskis, currently erased from memory and forgotten, into the circle of the Disawowed Soldiers. While in fact they have fought for the freedom of Europe during its first confrontation with fascism, and then for the independence of Poland on many fronts.
I want to recall the people fighting under the banner “For Your Freedom and ours”. We connect to the past through what we talk about: the idea originating to Kościuszko, the Polish Legions and International Brigades. Because it was Kościuszko who first involved all the citizens of Poland, or rather all Poles, in the fight for freedom and put the slogan “For Your Freedom and Ours” on his banners. It is at his side that Jews, for the first time since biblical times, led by Berek Joselevitch were allowed / given chance to fight as soldiers of national army. – writes the artist.
The symbolic dialogue with the space of the Tomb of the Unknown Soldier on this day was rooted in the tradition of official gestures and typical rituals. The artist made a tricolor flower wreath, the flowers of which were composed into the symbol of the flag of the International Brigades and a replica of the flags of the XIII International Brigade from Poland. The first banner of the Naftali Botwin Company, the Palafox Batallion was created on the basis of the original stored in the archives of the Jewish Historical Institute in Warsaw. The other one – that of the Adam Mickiewicz Battalion – was recreated on the basis of the documentation from the times of the Civil War in Spain. Similarly, a few antifascist flags were made. The choice of those two banners was not coincidental: it was in the Naftali Botwin campaign, comprised of Jewish volunteers who spoke Yiddish, that artist grandfather fought among. Adam Mickiewicz batallion, on the other hand, comprised mostly of members of ethnic and national minorities of Poland and bore the name of a famous poet, whose Jewish origins the majority of Polish people are completely ignorant of. There was an important cultural element coming from Judaism in his identity and his work. It was him who not long before his death created a Jewish legion in Turkey that was supposed to fight for the independence of Poland. He also designed the uniforms for the brigade himself.
The artist together with friends invited to take part in the action marched from the memorial of Marshal Józef Pilsudski to the Tomb of the Unknown Solider. The group walked in two columns, with the artist at the front carrying the wreath, and the other members carrying the flags. They paid tribute to the Dąbrowszczacy, laying the wreath at the Tomb of the Unknown Solider, just as any official delegation would. Hertzberg announced: To the Volunteers of Freedom, members of the XIII International Brigade, Dąbrowszczacy. Next, the actress Agata Różyca read the poem by Władysław Broniewski “Glory and Dynamite”.
The performance showed that the memorial is an ideological matter, susceptible to political changes. Through her actions the artist was able to seize the public space and demonstrate that the Tomb of the Unknown Solider should be a memorial of collective history of the Polish citizens, fighting for the freedom and independence on different fronts of war, and remain independent despite the changes the current political mood.
The artist incorporate the private in the public, by explaining the context of this individual protest on the leaflets distributed among the participants of the event. She shared that it is the family memory which inspired her to start the project. Hertzberg: We are a part of these people and they are a part of us.