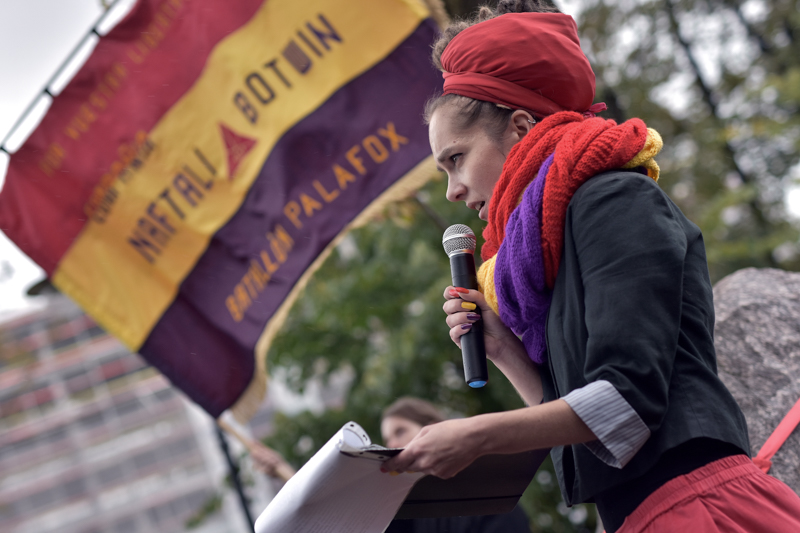 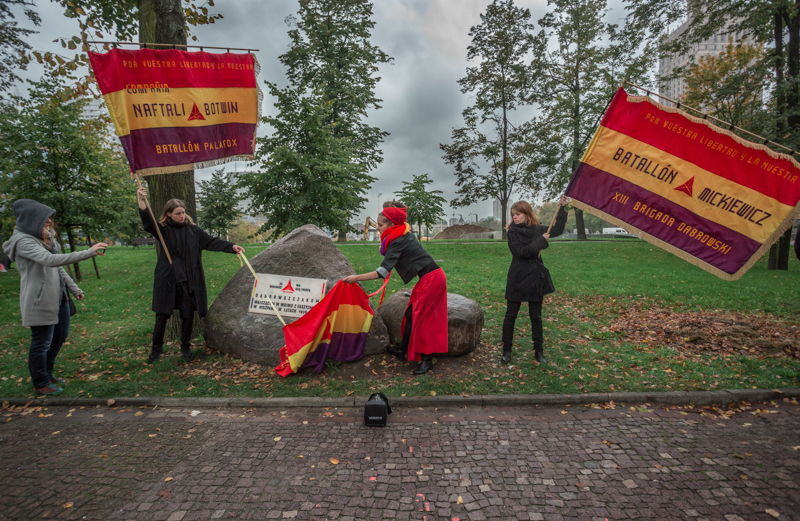 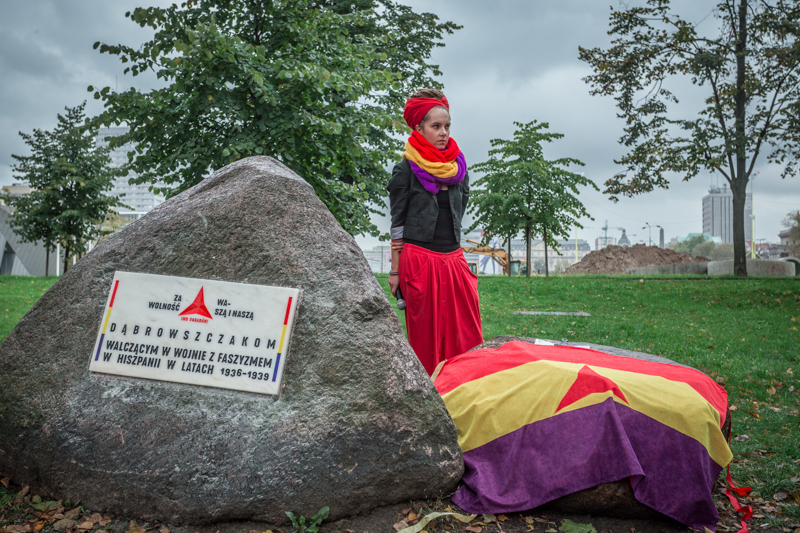 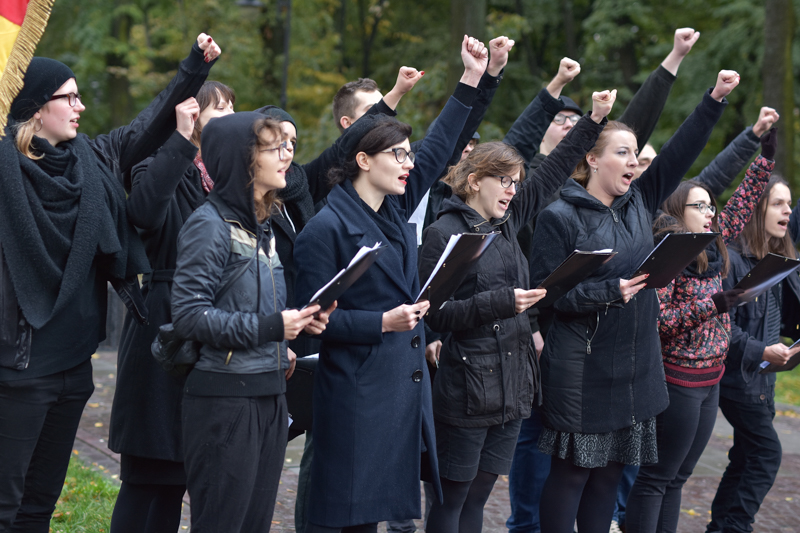 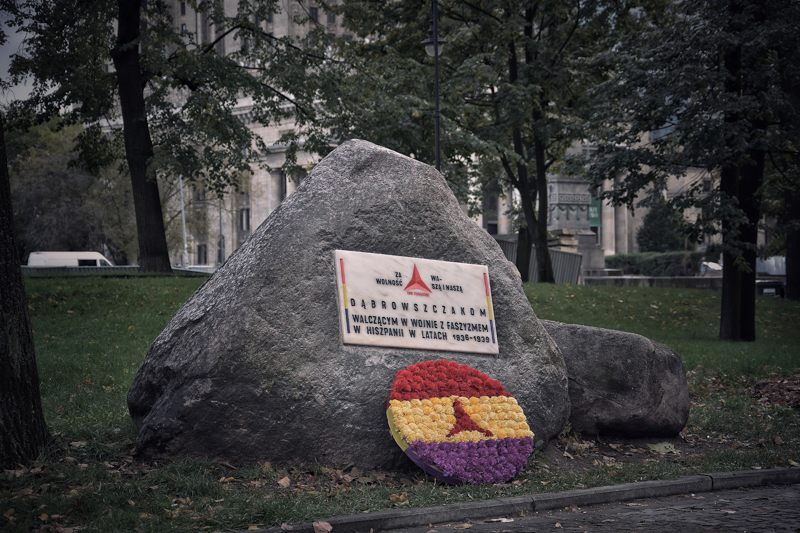 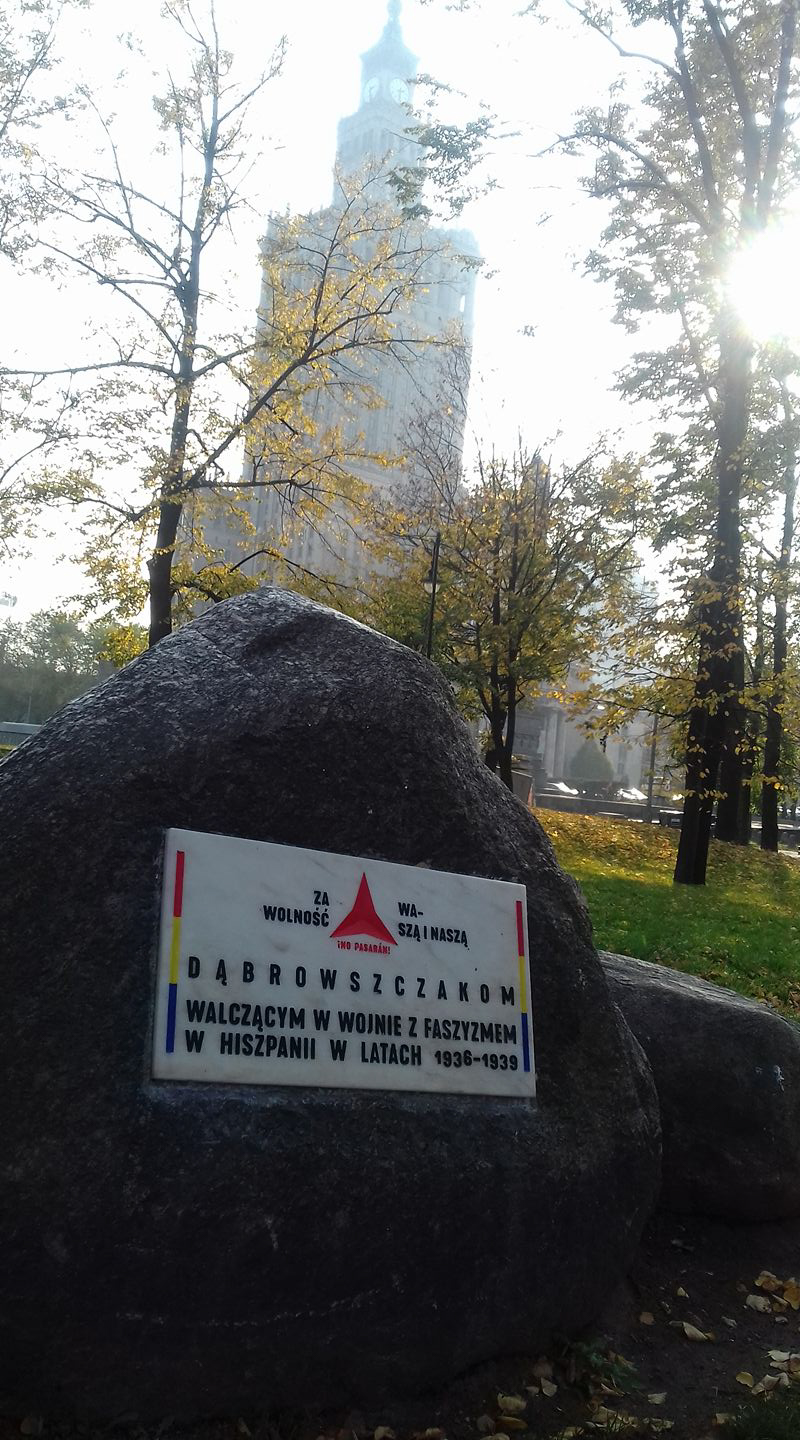 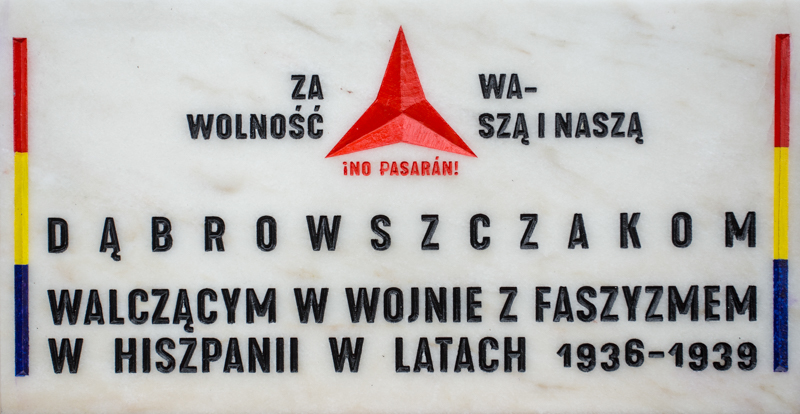 The artistic activities of Zuzanna Hertzberg in the framework of the ninth edition of the festival Warsaw Under Construction seek to recall the long-erased memory and the disappearing history of leftist movements and activists, and to remind us of the fact and importance of the Jarosław Dąbrowski XIII International Brigade in the Spanish Civil War of 1936 to 1939. The plaque that was originally on this stone obelisk had commemorated the site of the creation in 1918 of the KPP – the Commu- nist Party of Poland – at the intersection of streets that ceased to exist after the war in the neighborhood of what is now plac Defilad; that plaque disappeared silently one day after 1989. This stone became a scar of memory. The Dąbrowski Brigade, largely composed of Polish Communists called “volunteers for freedom,” fought in an international antifascist surge in the defense of the democratic Second Spanish Republic. Today, their memory is being effaced in Poland’s urban spaces, their ideals are being falsified and their heroism omitted. In her new artistic action, Hertzberg opposes this effacement, from the Polish tradition of struggle for a better Poland and world, of the memory of those who fought and died for “yours
freedom and our.” On the scar left by the original plaque on this stone, she affixes a bandage of memory dedicated to the Dąbrowski Brigade of Polish antifacsists, in this city and on this site that was levelled by German fascism between 1939 and 1945. With this, she says no pasarán! to the policy of no memory, the policy of new, false historical narration now supported by the Polish state. Warsaw is inscribed in the history of the Second World War with the most tragic uprisings: with the Warsaw Ghetto Uprising then the Warsaw Uprising in 1944. It is impossible to delete antifascism from the history of Warsaw.
Roman Kurkiewicz

Zuzanna Hertzberg plumbs the depths of her family history to fuel her artistic and activist efforts revolving around collective memory and the process of writing history. Her most recent work was inspired by a memorial boulder in Świętokrzyski Park com- memorating the formation of the Polish Communist Party in the Tradesmen House that stood there before the war. The artist saw the boulder, its memorial plaque removed after 1989, as one of many examples of unwanted history. Using the empty spaces left over after the removal of similar monuments, the artist attempts to revive and articulate the memory of the Dąbrowski Battalion, a Polish all-volunteer unit that fought against fascist forces in the Spanish Civil War and is the subject of fierce public debate over the unit’s presence in official accounts and histories. In her piece, the artist overwrites another layer of memory of the International Brigades — a layer that may very well soon be replaced by another.
Szymon Maliborski